So first, there's a new script available on CreativeCrash. It's called gf_simplifyCurve and as you can guess, it simplifies curves.
There's a lot of differents algorythms to simplify curves and the idea is to regroup them in that script so you can try them all and use the one that fits the best to your curve.
Currently there is the Ramer Douglas Peucker algorythm and the Whyatt one.

Second, I've updated my curveOnMesh script and it's now able to draw meshes with the curves. All the intructions are in the readme.txt and on the creativecrash page.

Enjoy those script and don't forget to give some feedback, it always helps ;-)

Curve On Mesh & Simplify Curve from Guillaume FERRACHAT on Vimeo.

I've updated my Draw Animation script and added some feature like the rotate mode, the time factor (wich lets you change the framerate during the recording process) and the ability to key the attributes from channelBox only.

You can download it here : http://www.creativecrash.com/maya/script/draw-animation
Don't forget to update the launcher from 1.0 to 2.0 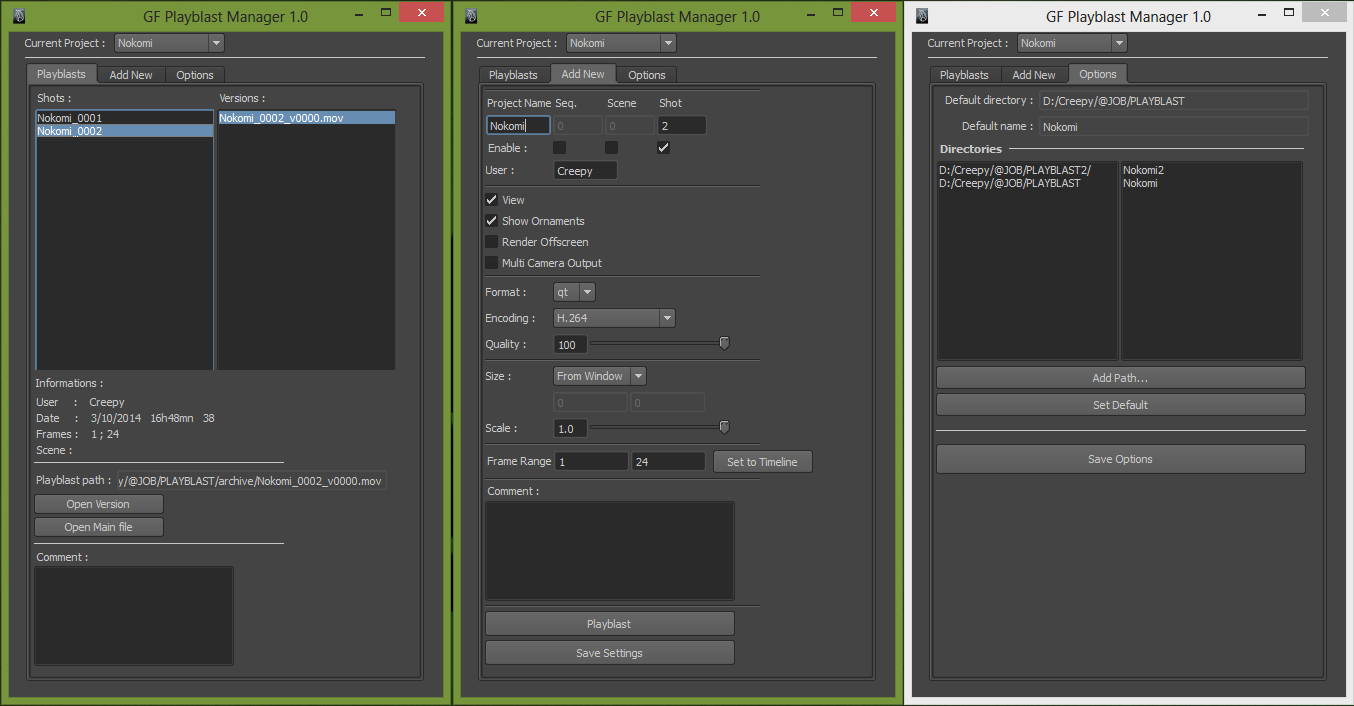 This new script helps you manage your playblasts on a specific project. The main idea is that you will be able to keep a track of all the different versions of each shot and automatically update the animatic.

First you have to choose a path to store your blasts.
In this path there will be 1 blast per shot that will be overwritten when you create a new version.
Whenever you create a new playblast, there will also be an incremented copy in the "archive" folder.

as for all my other scripts, any kind of feedback is highly appreciated and will help me improve my tools to suit your needs.

My new script is now on CreativeCrash. I've been working on this one for a few monthes, restarted everything from scratch once. 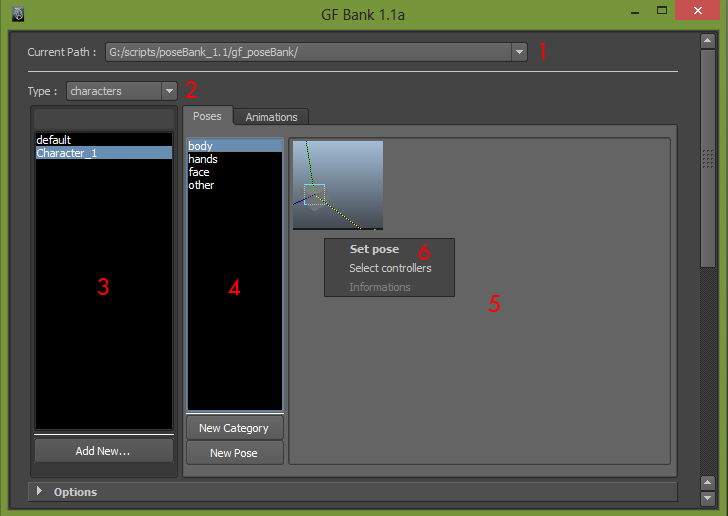 This script stores poses and animations in XML format on your computer and lets you reuse them. You can download it here : http://www.creativecrash.com/maya/script/gf_bank
There is a detailled PDF document with the script.

This is the very first version, you may encounter some bugs. Any kind of feedback is highly appreciated. Critics, bug report, suggestions, anything that may help me improve this script.

And here's a new script I just did : drawAnim. It creates an animation on the selected object based on what you draw with your pen or your mouse. By default there's one key per frame, but you can choose to simplify the curve. It is downloadable here : http://www.creativecrash.com/maya/script/draw-animation


Modular Autorig from Guillaume FERRACHAT on Vimeo.
Watch on Youtube

Here's my third automatic rigging script, written it in Python. I made it because I needed something that could let me rig absolutely every kind of character. That's why this new script is not a basic autorig for bipedal character, but more like a big rigging toolbox that I will enhance whenever I need something new. The idea is that I don't click one button to generate a full body, but that I use different modules to build differents parts and attach them together.


The first step is to initialize the rig. It begins with the name of the character, then the scale and whether I want to use the character's name as a prefix or not.

This first step creates the World controller, the main group and the sub groups

Then, as you can see at 00:07, I create the root controller. For that I use the Controllers module. It's a module that creates different kinds of controllers, with several options like the size, color, axis, etc...

If there's an active selection of components, it will snap the the controller to the center of the selection.
If there's several objects selected and the "&" symbol in the name, it will create one controller per object and replace the "&" by a number.
Finally, if a mesh is selected, a shift + click on the button will launch a special tool (called dragger context, for those who are familiar with maya scripting) made with API that let's the user create controllers and move them on the surface. It's quite useful to quickly create the controllers I use for facial rigs.

The second step is to build the torso because on my character, all the other parts are attached to this one. For that I use the IK Spline module and set the root controller as the parent of the torso.
First, the tool creates a curve with several CVs according to the set number. There's one CV per controller. The ik spline can be in IK, FK or both. For the torso I usually use both, with 2 division on a standard human, and only one division in FK for the neck.

Now that the torso is done, I can attach the limbs. The clavicle is optional and has an autoRotate mode for quadruped legs, but that can also be useful for human arms and even legs to have an automatic shoulder and hip rotation, I'll show that in my demoreel soon.
The limbs have several options such as non roll and bendy limbs. The hands and feet are made with a different module.

To build the other side, I use the mirror module to mirror the locators, then I load the new locators into the corresponding modules to build the mirrored limbs.

The eyes are made with the look At module. It simply creates a set amount of joints aiming at their controllers, with an optional master controller

Now, once all the part are rigged, I finish the rig with the space switches. It creates constraints (parent, orient or point) with multiple targets, and an enum attributeto switch between them

It is obviously longer to build a standard human rig with my new modular autorig than with my old one, but the good thing is that this autorig is much more flexible, I can rig pretty much anything.

I'm currently working on a new module for facial rig, and I will also add some of my external tools to this autorig (like my dynamic bones rigging script)

Who the Hell is this guy ?!

I am a Maya rigger and scripter based in France, I graduated from the ESMA Montpellier in September 2012. Since then I've been working on props and character rigging.

I mostly work using my own python scripted tools and some good ones found on the net. I'm constantly looking for new ideas and problems to solve, and I thought it would be good to share it here :)